When there is an outbreak of viral diseases, most of the patients suffer from temperature and fever. People usually do not like high temperature though, they should know it is a proof that their bodies are fighting against viruses. Even Andre Lwoff (a Nobel Prize Winner) declared that temperature actually supports to fight against virus and patients should not use any drug.

Furthermore, famous doctors like Werner Zable and Josef Issels researched and revealed that artificial fever can even used to treat many dangerous diseases like cancer.

Another study by Dr. Ernst (a renowned German professor) revealed some astonishing facts. Based on his research on the marathon runners, there was not even a single patient of cancer! He proved that the runners’ bodies always excrete lead, nickel and cadmium whenever they run and sweat that ultimately overcome their chances to suffer from cancer.

Other scientists worked on his idea and found the same results. Though, not all athletes sweat as it requires a lot of hard work and stamina and therefore, only passionate runners will sweat and enable them to excrete toxics from the bodies. In fact, a large population of the world does not exercise just because of their duties or jobs to fulfill. However those who do exercise are not able to sweat in the manner quadriplegics, paraplegics and other people do. Such people badly need to sweat their bodies so that toxins can be excreted from their bodies and they will live a healthy, happy life. 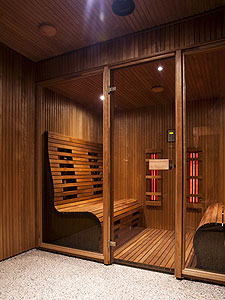 So, if you are looking for a medicated way to sweat and want to get mental satisfaction, then saunas are available. The use and benefits of infrared sauna can be found in all over the world. The MD of Sioux Lookout Zone Hospital T. Kue Young and medical expert conducted an extensive research to know about sweat lodges which are used by North Americans. They found that these lodges were helpful in treating illness and increasing overall health of the citizens. Their aim was to enable citizens’ bodies to excrete toxins and lubricate the bodies.

M.D as well as the army flight surgeon, Ward Dean declared that sweating by infrared saunas is the best option for regular workout, particularly for those whose are unable to exercise due to some reasons. Even though saunas can’t shape up your body, they can still help in substituting the cardiovascular effects of exercising and running. They can also be used to control the sweat procedure to cleanse the body.

In the modern world, infrared sauna is capable to ventilate fresh air and produce radiant heat to comfort people in all the way. With the help of infrared technology, the trial of radiant heat has become successful and hence, has been marked suitable by the Underwriters Laboratories. Unlike traditional saunas, the technology actually offers energy efficient and low cost saunas that directly heat muscles and prevent the patient to suffer from suffocation. People can comfortably try them as they are safe and flush out toxins by sweating- though, increase temperature and blood pressure a bit.